Pen-Opake vs. all other white inks 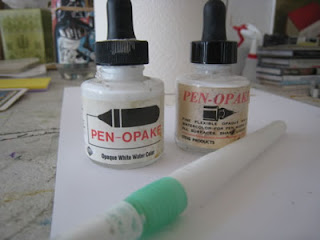 Pen-Opake is the best white ink there is. The only problem is that they stopped manufacturing it several years ago and nobody seems to have a stash for sale. Occasionally it is mentioned nostalgicly on some art blog or another, but other than there is little info about it on the net or anywhere.
I've been using up the few crusty bottles I procured from the Junk Store on all those ink-and-white-on-paper-bag drawings I've been doing, so I set out to find a suitable replacement. Some illustrator friends of mine mentioned that FW Acrylic Ink is a very opaque and fluid white, so I procured me some and put it to the test... a test it failed miserably.
So I went through my stash of white inks and gouaches to see who had what it takes. 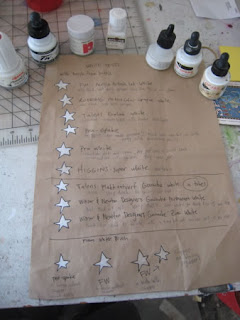 I tested the FW, Rotring, Talens Ecoline, Pro White, Pen-Opake, and Higgins Super White, all in jars with a brush on a paper bag. I also tried tubes of Talens Plakkaatuerf, Winson & Newton Designers in both Permanent and Zinc White. Some of the thicker ones needed a touch of water to get going.
The Pen-Opake was easily the best and brightest. And this was from a jar that is likely 20 years old. The Talens Ecoline was a decent 2nd place, and I suppose the Pro-White will do in  a pinch. The Rotring and FW are liquid, which I thought would work well in a japanese water-brush, but I thought wrong. The Higgins was, by far, the worst.
All the tubes of gouache looked pretty good. I was hoping to find a suitable replacement for Pen-Opake that is bright and opaque but fluid enough to use in the water-brush. I also ended up learning quite a bit about water-brush technology and the fact that my current white brush only works because it is a cheap imitation without a stopper mechanism to block the overflow of water. Fascinating.
So, yeah, if you come across any Pen-Opake in any condition, let me know and I'll buy it from you. Or if you have any other bright ideas about an opaque white, hit me up. 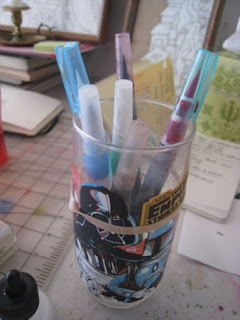 I have been trying to get American ink companies and Daler-Rowney (who owns the FW name and bought Steig Products that made Pen-Opake as well) interested in resurrecting these old inks. Arthur Steig was the ink making genius behind Steig Products. Around 1995 Arthur sold Steig Products to Daler-Rowney, who immediately changed ALL Steig's formulas into cheap crappy acrylic recipes that just don't stand up the miraculous inks of Arthur Steig. NO American companies have even responded or just blew me off. FW black waterproof ink has never been equaled and every graphic designer in the USA used that ink in their Rapidographs because IT DIDN'T CLOG. The only ink that never did. I had a Rapidograph that got thrown in a drawer when computes came along, SIX YEARS later I found that pen and it started right up! There's no ink ever made that could do that except Steig Products FW. I have two good bottles of this stuff I recently scored to send any company interested in replicating those inks, Pen-Opake included if I could find a bottle.

All Arthur Steig's formulas have been lost to time. Daler-Rowney did respond to me but then mysteriously never got back to me. Their chemist claimed that Steig inks were all acraylics which is just nonsense. Acrylic inks don't work in fountain pens and are very damaging and clogging, like GLUE. I used Pen-Opake too and it was marvelous and could be used in a 3x0 Rapidograph and rarely clogged.

There's one ink you didn't try that is still being made but hard to find, Dr. Martin's Pen White, give it a try, you can find it if you google search if you're lucky, its not bad but its no Steig Product either, nothing is. Really sad that American companies could give a crap about making something again that outshone every product of its time and our own time, they just don't want to hear that someone made something way better than any modern company seems to be able to, very sad......

I never got to try Pen-Opaque, but I can sure vouch for the old FW India ink. I tried for years to get anyone to listen to tell me where there was another India ink that black and beautiful that would work in my fountain pens, and they all just looked at me like I was crazy. They don't remember the ink, and they don't care, either. I don't get it.

I never knew the story about Steig. It's so sad when genius like that slips away via cultural apathy and mediocrity. I so miss that ink. Still searching for a replacement. I heard that Private Reserve Invincible Black was good, so I'm going to order some. We'll see.

As far as white ink goes, I was hoping the Koh-i-noor Universal white would be good, but haven't tried it. I got a Sakura Pen-touch .7mm permanent white pen today, and it seems okay for my purposes, but I wouldn't try filling in large areas with it, as it gets a little runny and inconsistent in spots. Good for short lines, though. I'm also looking for something I can load in my waterbrush. Will try the next best listed here.

Good luck with the search!

Oh, I just remembered, Noodler's makes a white ink. I was thinking of trying that one, too. It's for fountain pens, so should probably work with a waterbrush. Not sure how white it is...

Thanks for commenting, Leha.

Hi, do you have a larger image of the ink sample? I'm interested with rotring white ink, and I saw on your image, there's rotring result too, but it to small, I can't see it perfectly.

I've tried rotring white ink, but unfortunately it doesn't make solid white above the black ink, until I make 3 layers on it.

I want to use it for highlight in my illustration, do you have another alternative for rapidograph ink? maybe Staedtler or Koh-i-Noor white ink?